TR’s Mark on US Army Uniforms

In 1901, Theodore Roosevelt wrote his New York State National guard friend, Colonel William Cary Sanger, whom he had appointed to study Swiss and British reserve forces in Europe, “The first requisite in the service uniform is absolute ease and freedom. Anything that binds the body, particularly the knees, hips and arms, and anything that confines the body is all wrong. . . . The present [Army] uniform is all right in the material, but dark blue is one of the worst possible colors for campaign use. The shirt should invariably be of the neutral tint, like gray or brown.”

Before TR wrote that directive, both he and Colonel Sanger had hard won experience on the ins-and-outs of army uniforms. 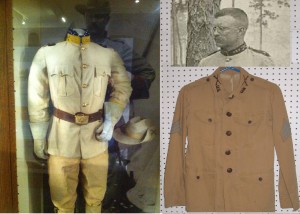 TR’s Mark on US Army Uniforms

Step back three years. Before the newly minted Lieutenant Colonel Roosevelt left New York City for San Antonio to join the 1st U.S. Volunteer Cavalry—better known as the Rough Riders—he ordered a custom uniform made to his exact specifications. That uniform (shown on the left) can be seen today at Theodore Roosevelt Museum at Old Orchard on the campus of Sagamore Hill National Historic Site. Unlike the nearly worthless woolen uniforms worn by the Army National guard units sent to Cuba during the Spanish-American War, TR’s uniform had no woolen components and was made of canvas.

In designing his uniform, TR was totally familiar with the very practical butternut uniform worn by Confederate soldiers in the Civil War. As it turned out, the Rough Riders used a derivative of canvas. Although canvas is thick and somewhat uncomfortable in hot and humid weather as anyone down south can attest to, it also breathes, thereby not clinging to the skin and enabling air to ventilate up through it and draping itself down from the waist like a tent. Canvas also wears much longer than wool.

TR had an interesting friendship with and received excellent advice from Colonel Sanger. A well-connected fellow Harvard man and New York State Republican, Sanger was born in Brooklyn in 1853 and was educated at the Brooklyn Polytechnic Institute, Harvard College, and Columbia Law School. During his college years Sanger joined numerous clubs and societies and played on Harvard’s first varsity football team. In 1894 he was elected to the New York State Assembly as a Republican from the second district of Oneida County, serving from 1895 to 1897. As a member of the Assembly, Sanger was particularly concerned with civil service reform and ballot reform.

Sanger also had a lengthy military career. In 1890 he was appointed assistant chief of artillery at the rank of colonel in the New York State National Guard. He was an honorary member of Company G, 21st Regiment of the New York State National Guard, as well as a lieutenant colonel of the 203rd Regiment Infantry, New York Volunteers. During the Spanish-American War, Sanger was Provost Marshall of Camp Black near Hempstead, Long Island. After the war, he served for several years as an assistant inspector general of the National Guard of New York, and in 1899 was appointed inspector general by then-Governor Theodore Roosevelt. The following year at the request of the President William McKinley, Sanger traveled to Europe to study the organization of the reserve and auxiliary force of Great Britain and the militia of Switzerland. McKinley appointed Sanger assistant secretary of war in 1901, a role he continued under McKinley’s successor, Roosevelt, until 1903. TR would later appoint Sanger Assistant Secretary of War and the Theodore Roosevelt Center at Dickinson State University in North Dakota has several copies of letters between the two.

As a result of TR’s interest in uniforms and Colonel Sanger’s work in Europe, the US Army Uniform board of 1902 issued General Order 81 which represented a massive overhaul of the Army uniform regulations. In the new US Army field uniform, we see represented TR’s own experience with the Rough Riders and their very wearable custom uniform and its direct descendant, US Army Coat Military Specification (MILSPEC) No. 631, of 1902/1903.

Keith Simon is a member of the Theodore Roosevelt Association board of trustees.
View all posts by Keith Simon »